Learn to play sitar with the best online classes in Singapore. Our online Sitar lessons will help you to learn to play Sitar efficiently.

A traditional Indian instrument, the sitar can have up to 20 strings, seven of which are played, and the remainder act as “sympathy” strings giving the sitar its unique sound. The sitar is believed to have evolved into its current form around the 1700s and is particularly prevalent in classical Indian music, especially in the Northern region of Hindustani.

Whilst playing the sitar can be immensely enjoyable, after sitting down in a cross-legged fashion for a considerable amount of time standing up can be extremely difficult!

Factors to keep in mind while learning to play sitar –

Tuning each of the 7 strings of the sitar, push each peg into its hole, thus tightening the peg to stop it slipping out of tune.

Predominantly performed on the 1st string, bending on a sitar is designed to be done across multiple frets across the curved fretboard.

Indian musicians believe that whilst playing the sitar players must feel the music, therefore allowing creative imagination to decide which notes to bend to.

The Mezrab is a sitar plectrum, worn on the right index finger. A long, pointed metal wire covers the nail and hooks itself under the finger.

Different sized Mezrab can be purchased depending on finger size – choosing one that is too big will undoubtedly fall off and inconvenience playing.

Factors to look out for when purchasing a sitar:

-General rule: older sitars are of better quality, often made from Indian mahogany or Burmese teak

-Quality meend. The ability to bend or pull the main string for a wide range of notes is a crucial element of a sitar. The best sitars have a meend range of 5 steps, from the tonic note to the fifth.

-Always get a case! Sitars are delicate instruments, they need care and attention.

The frets should be rather thick, tied on tightly with thread. Before purchasing, make sure that a reputable dealer will retie the frets using a strong thread.

The teacher will introduce you to the basics of the Instrument – Sitar. Then, will start with SaReGaMa on sitar.

To be provided during the session.

A Sitar of your own choice.

Get lifetime assistance even after course completion 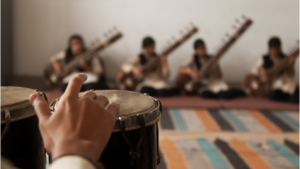 You need to purchase the product to access the Resources.

Want to gift this class to someone you know?

Get a chance to chat with your provider.