Ayurveda: A Holistic System of Medicine

Ayurveda is a holistic system of medicine that is indigenous to and widely practiced in India. The word Ayurveda is a Sanskrit term meaning “science of life”. Ayu means life or daily living and Veda is knowing. Ayurveda helps the healthy person to maintain to retain health and the diseased person to regain health, it is a medical metaphysical healing life science.

The practice of Ayurveda – a holistic system of medicine is designed to promote human happiness, health, and creative growth. As an art and science of living, Ayurveda has a great deal of wisdom that is just as easily applied to children as adults.

According to Ayurveda, food plays a vital role in maintaining health and longevity. A large part of healing and wellbeing in this ancient system of medicine depends on our diet. In fact how to eat, when to eat, combination to avoid, who can eat what, and so on.

95% of the body’s happy hormone serotonin is found in the gut containing over a hundred million neurons, the gut has been dubbed by scientists as the body’s second brain, in fact, 90% of the information carried by the central vagus nerve connecting the gut with the brain go from the gut to the brain and not the other way round. This means one’s gut influences one’s brain more than the other way around. Hence the saying “one is what they eat”.

Everybody is classified as having one of the three doshas or physical constitutions that give individuality to each person’s physiology and behavior, predominantly, Vata, pitta, and Kapha. 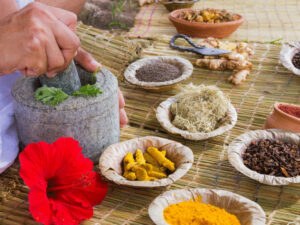 In childhood, Kapha tends to dominate everyone. During this phase, ayurvedic nutritionists recommend avoidance of sweet and cold foods as they aggravate Kapha. An active process of physical evaluation in Ayurveda is Nadi pariksha or pulse diagnosis. This is the science of evaluating the current state of a person’s body-mind a spirit, by reading the flow of life force.

Ayurveda has some simple rules for eating. Inculcate these in the child early on. It will go on the long way in the well-being of their gut. For children to have a stronger gut, a disciplined dietary routine, and active lifestyle are necessary. A buildup of stress due to academic pressure or in general can affect the digestion Of a child. So it is equally important to introduce children to yoga and meditation.

0
Your Cart
Your cart is empty
Continue Shopping
Apply Coupon